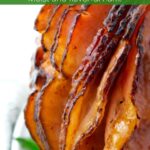 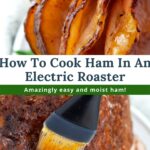 Preparing Glazed Ham in a Roaster is the best way to cook your holiday ham! The sticky glaze adds crazy-good flavor and keeps the ham moist - no dry ham here! Plus it leaves the oven free for all those delicious side dishes.

Whether it’s Easter, Thanksgiving, or Christmas dinner we always have ham and turkey on the menu. Now don’t tell Mr. Gobble, but Mr. Piggie is my favorite. Sometimes my in-laws spring for a Honey Baked Ham because they are convenient - and I will concede that they are tasty. But have you seen their price tag? Oh my! So expensive.

Luckily, this ham recipe is less than half the cost and solves the problems that arise when making a ham for the holidays.

So why should you use an electric roaster?

While the ham is cooking away, try loading up the oven with these make-ahead scalloped potatoes, this twice baked potato casserole, or these easy buttery dinner rolls. All amazing side dishes to complement the ham cooking in the roaster.

For this recipe you only need two ingredients.
Ham: Spiral cut hams are the easiest to cook and serve. However this method will work for any precooked ham. If you haven’t chosen a ham before see the notes below on how to choose a spiral sliced ham.
Glaze: If your ham comes with a sweet glaze packet, feel free to use it. Although this easy Pineapple Glaze for Ham takes only 10 minutes and is perfectly spiced with pineapple and brown sugar for deep flavor. We think it's better than Honey Baked Ham.

*Note: This recipe only requires two ingredients, but you will also need a disposable large roasting pan. I use a half size steam tray. Its dimensions are 13x11x2.5 inches.

How to choose a spiral sliced ham?

Spiral sliced hams come in various sized but are usually precooked with a bit of smoke for a delicious flavor. The only downside to spiral hams is that if they are not warmed correctly they will dry out. But no worries! We will help make sure that doesn’t happen.

The best way to ensure a delicious ham is to start with a quality product from the grocery store. I have always had luck with Sam's or Costco brand hams. No matter where you purchase it, look for a product that says "with natural juices" for the best flavor and consistency.

While this cooking method can be used on different types of ham, it is only for precooked ham. This method is not for a fresh ham or uncooked ham.

🐖 How to cook ham in a roaster

The best way to keep a ham moist, yet flavorful, is to cover it in a glaze and cook it in a roaster pan. Some might say a slow cooker is an option, but a spiral ham doesn't fit well into a slow cooker.

First, make sure your roaster oven is large enough. I have a 20 quart Oster electric roaster oven. It is perfect for this. Any size of a roaster oven will work, as long as it is big enough to fit the ham in without the ham touching the sides.

Next, set the rack that comes with the roaster oven in the bottom of the roasting pan. Do not add any liquid. If too much liquid is added it will braise the ham instead of roasting it.

Brush the entire ham with half of the glaze. Gently separate the slices and allow the glaze to drip down in between. If you pull the pieces apart too far they won't have that tight spiral ham look.

Set the disposable pan on the rack in the roaster. Set the roaster to 250º and cook the ham covered for 12-15 minutes per pound, or until ham reaches an internal temperature 140-145 degrees. The best way to test this is with a digital meat thermometer in the thickest part of the ham.

Once the ham is warmed through, pour off any accumulated juices. Then brush the outer layer with the remaining ham glaze. Place it back in the roaster, cover, turn off, and let the ham rest for 20 minutes.

Optional but recommended: Place disposable pan on the middle rack of a conventional oven (be sure to support the bottom) and broil until golden and crispy like a honey baked ham. Alternatively, if you have a food torch carefully use it to caramelize the edges of the ham.

During the holiday season, special occasions, or even a big Sunday Dinner, the best thing a person can do is prep ahead. When making a ham, the glaze can be made ahead of time and the ham can be stored, ready to go in a disposable roasting pan in the refrigerator overnight.

How long does it take to cook a ham?

Do you need to put water, broth, or stock in the bottom of the roster?

No liquid is needed in the bottom of the roaster. Think of it as a mini oven. A small amount of liquid will accumulate in the disposable pan while the ham is cooking allowing for a moist heat which helps to keep the ham juicy.

How much ham per person?

In general, ⅓ to ½ pound per person is enough. However, If you are serving more than one main course or a ton of side dishes then you can probably get away with a little less. Keep in mind that you should account for the bone if you're serving a bone-in ham.

Do I have to use a spiral ham? How to cook a non-spiral ham in roaster?

Even though the type of ham we usually choose is spiral, a boneless ham can be cooked in a roaster, but it is cooked a little differently. Slice the ham, and glaze each piece. Layer those pieces in the disposable pan and bake until warmed through. The cook time will depend on the size of the ham.

As a note - We have not cooked a country ham in a roaster before.

If you try this recipe, please leave a comment and star rating to let us know how it is! We’d also love to connect with you on Facebook, Instagram, or Pinterest. Tag @borrowedbites or hashtag #borrowedbites to show us your food! 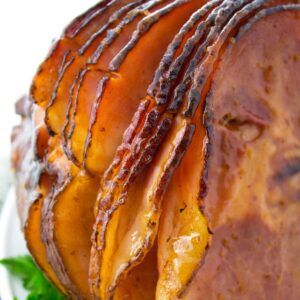 Glazed Ham in A Roaster

Prevent your screen from going dark

All nutrition information is provided by a third party and is an estimate only. Use your own nutritional calculator for more specific measurements.

Tried this recipe?Leave a rating or pin it for later!
« The Best Pineapple Glaze for Ham (w/ Brown Sugar)
Easy Fruit Salad Dressing »

Hi! We are Danielle and Misty: a mom and daughter with a serious passion for seeking out the best recipes to serve again and again to those we love. With a mix of everyday favorites and indulgent weekend fare there is something here for you and yours as you develop your own family traditions.